​Jon Gibson - Composer
Composer and multi-instrumentalist Jon Gibson is a pioneering figure in the minimalist movement. He is a founding member of the Philip Glass Ensemble, and has taken part in numerous landmark musical events, performing in the early works of Glass, Steve Reich, and Terry Riley. He has created a large body of works since the late 1960's—solo and ensemble, instrumental and vocal—which have been performed throughout the world. Gibson has collaborated with Nancy Topf, Thomas Buckner, the Nina Winthrop Dance Company, Elisabetta Vittoni, David Behrman, Lucinda Childs, the Merce Cunningham Dance Company, Jaron Lanier, and with director JoAnne Akalaitis on Voyage of the Beagle, a music theater work centered around Charles Darwin. His music can be heard on the New Tone, Point Music, Lovely Music, EarRational Records and Einstein Records labels.

​Miriam Seidel – librettist
Miriam Seidel has also written the libretto for Judgment of Midas, an opera with score by composer Kamran Ince, which received its concert premiere in Milwaukee, in a co-production with Present Music and Milwaukee Opera Theatre. Currently working on an opera project with Kitty Brazelton, The Art of Memory, scheduled for a workshop in January 2016. Both operas have been developed with help from American Opera Projects. Her dramatic works include Interference, with composer John J.H. Phillips, broadcast on New American Radio, and The Big Picture, a monologue produced at InterAct Theatre. Her short fiction and essays have appeared in journals including Exquisite Corpse, Washington Square and Phoebe, and most recently in the Asteroid Belt Almanac. ​

Terry O'Reilly – director
Terry O'Reilly is an internationally active director, designer, actor and writer, Co-Artistic Director of Mabou Mines since 1973 and veteran of over 25 productions with that company. Recently a Senior Fulbright Scholar in Taiwan, facilitating study of traditional theatrical forms and rituals. Directing projects include Secret Love in Peach Blossom Land by Stan Lai at the New School in NYC; Brer Rabbit in the Land of the Monkey King, a Mabou Mines/Ming Ri production co-written with Simon Wong in Hong Kong; Voice of the Dragon II, at the Apollo Theater NYC; All in the Timing (Tudo no Timing) in Rio de Janeiro and other cities in Brazil; and Endgame by Samuel Beckett in Vienna, Austria. Playwriting credits include The Bribe and Animal Magnetism, directed by Lee Breuer and Ruth Maleczech respectively and toured internationally.
​

Boris Čakširan – set and costume design
Boris Čakširan is a choreographer and costume designer based in Belgrade, Serbia. Having worked as a costume designer for over 25 years, he is considered one of Serbia’s foremost costume designers for stage, film and television. He is the founder of ERGstatus, an award-winning contemporary dance project. His work as choreographer and director with ERGstatus reflects his belief in the arts as a healing factor in the human community. He has worked in dance education at leading institutions and festivals in Israel, Poland, and Italy. His many international awards include one of the first CEC-ArtsLink fellowships, leading to collaborative performance projects with organizations including GOH Productions, the American-Czechoslovak Marionette Puppet Theatre and the Silesian Dance Theatre of Poland.

﻿Sarah Drury – media designer
Sarah Drury is a media artist working with video and sound across a range of installation, performance and network platforms. Her work with sensing technologies and media focuses on narrative, play and the emergent subject in diverse contexts, from gallery installation and performance art to theatrical forms. Her work has been presented in national and international venues, including ISEA International, Association of Computing Media Multimedia Conference, Performative Sites, the Brooklyn Museum, The Kitchen, Artists Space, Hallwalls, the Philadelphia Fringe Festival and the Worldwide Video Festival at The Hague, and has aired on PBS. Her recent work Mechanics of Place, with collaborator Hana Iverson, is an “augmented reality” platform for user-generated virtual public artworks situated in various cities. Installations include The Listening Microphone, Voicebox, Vocalalia and Intervention Chants, which explore the expressive qualities of the voice in interaction with video and sound. 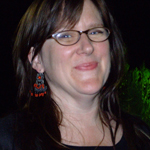 ﻿Mary Louise Geiger – lighting design
Mary Louise Geiger has created lighting design for numerous productions on Broadway, for dance companies and theater companies. Highlights include The Constant Wife, The Killing of Sister George, and Mabou Mines’ Dollhouse, which toured the U.S. and Europe. She also created the lighting design for Tongue of a Bird at the New York Shakespeare Festival, Jody Oberfelder Dance at Lincoln Center’s Clark Theater, and Oedipus at Palm Springs at New York Theater Project; and has worked regionally at Los Angeles’ Mark Taper Forum, the Berkeley Repertory Theatre and the Actor’s Theatre of Louisville. Geiger is Associate Arts Professor and Associate Chair of Design at New York University’s Tisch School of the Arts.

Ana Zorana Brajović – conductor
Ana Zorana Brajović is Opera Director at the National Theater of Belgrade. Before this she held the post of Assistant Conductor starting at the age of 18. Before the age of 20, she also gave her first piano recital at the Serbian Academy of Sciences and Arts; was awarded prizes in competitions in Belgrade and Stresa, Italy; and received the annual October Award, the highest award in Belgrade for music achievement. As a Fulbright Scholar, she studied with Gustav Meier at the Peabody Conservatory, during which she performed in a Millennium Stage Concert at the Kennedy Center. For the National Theater Opera House in Belgrade, she has conducted the operas of Mozart, Verdi, Puccini, Rossini, Bizet, Donizetti, Strauss and others.
email: violetfireopera@gmail.com
​